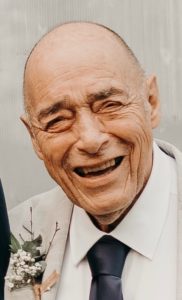 Phillip J. Marlotty, 84, was born to eternal life on Thursday, December 17, 2020 in the same way he lived his life, with his family by his side. Phil was born to Phil and Vera Marlotty. He married the love of his life, Shirley Kraimer, on December 26, 1959. Phil graduated from the University of Wisconsin-Parkside in 1978. Phil served in the U.S. Navy from 1955 until 1961 and in the U.S. Army Reserves from 1981 until his retirement in 2000. He worked at the Frost Company, Snap-on Tools, and Fort Sheridan. He was a member of Moose Lodge #286 and a devoted member of St. Mary’s Catholic Church, where he enjoyed tending the flowers. He enjoyed gardening and home improvement projects with his sons. He was happiest spending time with his wife, children, grandchildren and great grandchildren.

He will be welcomed into heaven by his parents, his sister, Gwen, his niece, Jonalee, and his in-laws.

The family would like to extend their gratitude to the staff at Froedtert Kenosha Hospital for their loving care.

A private family Mass of Christian Burial will be held for Phil at St. Mary’s Catholic Church.