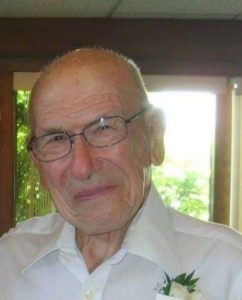 Louis Popp of Kenosha passed away while in rehabilitation December 18 from complications after heart surgery and Covid 19.

Lou was born on February 21, 1929 in Osage, Iowa and joined the Navy after high school. He worked as a driver and clerk while serving in Guam. After his discharge, he settled in Wisconsin. He met Mary Whidden in Cudahy and they were married on June 2, 1956, later settling in Kenosha. Lou tried his hand at several lines of work including managing a beer distributorship. In 1960, he decided to open his own business, Lou’s Carpet and Vinyl Service, in addition to working full time. Lou’s Carpet became an institution over time. To his children, it seemed he knew everyone in town, especially policemen. The business sponsored many softball and bowling teams over the years.

Lou was a longtime member of St. Thomas Aquinas and St. Mary’s Catholic churches. He served on building and grounds committees at both parishes, as well as ushering into his eighties.

Lou and Mary had four children, Timothy, Theresa, Thomas and Tammy. Lou took them on many driving vacations to visit relatives in Florida, always finding interesting places to stop. As his business grew and his family grew into a third generation, he was never happier than when he was able to treat everyone to family vacations at Disney World and Minocqua/Big St. Germain. After he bought property to house his business, he added office space which turned into a “club house,” where he and his buddies consumed an ocean of coffee and a mountain of doughnuts while they solved the world’s problems. He hosted many parties there for family and friends as well.

Lou loved being with people and telling stories. His children learned most of his favorite stories by heart. Many of those stories revolved around good times spent with Mary’s four sisters and their husbands.  He and Mary loved Christmas and hosted neighbors, children, grandchildren, great grandchildren and Santa every Christmas Eve for decades. The entire neighborhood will miss them very much.

Services will be held for immediate family only due to Covid 19 restrictions.