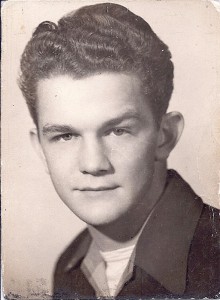 Norman was born on March 8, 1927 in Kenosha to the late James Nolan and Erna Olkives. He attended the schools of Kenosha and after his US Army service during WWII, he moved to California to chase his dream of becoming a professional golfer. He married Ruth McGee in California. They later divorced. Norman and Ruth welcomed daughter Jean to the family in 1968. He moved back to Kenosha in 1973 and founded the Premier Marble and Tile Company where he worked until his retirement in 1996 due to a stroke. Norman loved golf, animals and his special horse Ernie, but mostly he loved to spend time with his daughter and grandchildren.

Norman is survived by his beloved daughter Jean Nolen, his grandson Nathaniel Nolen-Boyle and his granddaughter Haleigh Kruse.

He was preceded in death by his sister Jean as a young child, his father and his mother.

A funeral service with full military honors took place on Thursday May 29, 2013 at Kemper Center Founder’s Hall. In lieu of flowers, memorials to the family would be appreciated.