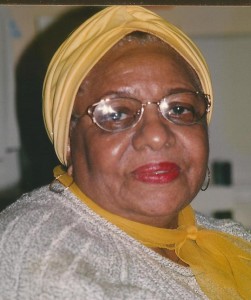 Louise Alexander, 87, a longtime Kenosha community leader, died on Thursday, May 23, 2013, at Clairidge House in Kenosha.
Louise was born in Chicago, Ill., on Sept. 22, 1925, to the late Wayman and Carrie Brown, and spent her younger years there. She educated her children in the schools of Chicago where she loved to volunteer in the lunchroom. She was later hired as a teachers aide and served as a den mother for the Boy Scouts. She was an active part of South Park Baptist Church in Chicago where she participated in fund-raising.
On July 5, 1974, Louise and her family moved to Kenosha, Wis. Within her first week in Kenosha, Louise organized a 4-H group in the Lincoln Park neighborhood. There they offered classes in gardening, sewing, dancing and culture, how to cook and how to keep house. Just as she was in Chicago, Louise was known as a frequent volunteer in her childrens schools, Lincoln Elementary, Lincoln Junior High and Tremper High School.
Louise worked at Kenosha Area Family and Aging Services as an aide to the Benefit Specialist Program. She also worked as a Job Developer with the Older Americans Work Program and did some private home health care under the auspices of Hospice.
To say that Louise believed in being of service to her community is an understatement. The list of organizations for which she volunteered is long and diverse and includes the Lincoln Neighborhood Center and Womens Horizons (both of which she helped found) as well as the Board of Health and Housing, the Senior Action Council, the Salvation Army, the K.V.A.C., Friendship Baptist Church, Kenosha Memorial Hospital and various nutrition sites in the Kenosha area.
Louise served as the past president of Ethnic Elders and on the advisory council of the Southeastern Wisconsin Agency on Aging. Louise was a proud member of the pastorial board of the Unity Church of Kenosha and Racine and was affiliated with the teachings of the Unity Church for over 50 years.
Louise is survived by her sons, Lester Alexander and Joseph (Georgina) Doyle; nine grandchildren and 20 great grandchildren. She was preceded in death by her sons, William Brown, Nick Alexander and Vaughn Alexander; her daughter, Joyce Alexander; her grandson, Ronald Alexander and her nine brothers and sisters.
A Service of Christian Burial will take place on Friday May 31, 2013, at 11 a.m. at Bradford Community Church (5810-8th Avenue).Visitation with the family will be on Friday at the church from 9:30 a.m. until the time of services. Private interment will take place at a later time.
In lieu of flowers, memorials would be appreciated.