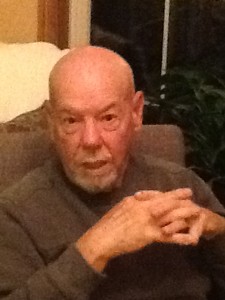 Mark Palmer Gray was born in Florida December 20th, 1931. When asked his fondest childhood memory he spoke of walking and playing by the ocean with his older sister Betty.  Mark attended elementary, junior and high school in Florida before pursuing his adult ambitions.

Mark lived a creative and interesting life as an art teacher, an artist himself, a collector of antique clocks, a gardener, and as a lover of classical music and opera. As a teacher at Lincoln Junior High School, he received The Kenosha Unified School District’s Junior High Teacher of The Year Award.  For over 33 years of teaching, he was an inspiration for many students who went on in their own lives with an appreciation and understanding of art.   Many Kenoshans will remember his show at The Kemper Center or the compelling mural at The Shalom Center.   Many of Mark’s paintings were inspired by his travels to Glasgow and Dalkeith, Scotland where he captured the rooftops which later appeared in many of his paintings.  Visitors to his home would find themselves surrounded by antique clocks chiming in every room.  Many people remember both his clock display at The Anderson Art Center and later at The Kenosha Public Museum which is now a part of the museum’s permanent collection.  An entire neighborhood watched as his garden emerged over many years of trial and error to become a showplace of beauty.  This garden was featured on the Four Seasons Garden Walk to the enjoyment of all.  Friends and visitors will hold memories of the music of Mozart and perhaps the singing from The Ring Cycle (a favorite) filling up the living room under the light from his stain glass windows.

Also, Mark served his country as a member of U.S Navy for four years.  Upon returning from the service, Mark majored in English and minored in art, graduating from UW Superior.  Later he went on to earn his Master’s Degree in Art through UW Whitewater.

Mark died peacefully at home on June 10th, 2014 surrounded by his closest friends and the treasures he collected over the years.

Mark’s front door was always open for friends to drop by for a glass of wine or beer and talk about the past, present or future-or just laugh and relax.   When complimented, “Mark, you live a great life,” he would respond, “I took advantage of what took place.”

Please remember Mark in your heart.  As per his wishes there will be no services.

Mark lived to color the world in many ways.