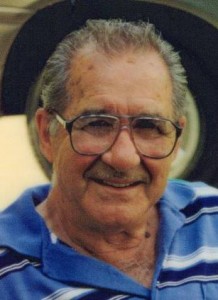 Born on May 30th 1920 he was the son of the late Dominic and Concetta (Jenny) Gaudio.

A lifelong Kenosha resident, he was educated in the schools of Kenosha. During World War II, he served in the US Air Corp from January of 1942 until October 1945.

On April 30th, 1988, he married RoseMarie Kenders at the Kemper Center in Kenosha.

He was employed for 12 years at the Simmons Co., and then worked for 22 years for the City of Kenosha in the Parks Department. He retired in 1982.

He attended services at Immanuel Baptist in Kenosha. He was an accomplished athlete, excelling in boxing, softball, and basketball. He also enjoyed playing bocce ball and dancing. He loved his family very much. He loved gambling and traveling to area casinos. He could also be seen perch fishing on the lake front.

He was preceded in death by his parents, his first wife Bernice (nee: Berlin), daughter Theresa Joy, and five sisters; Louise, Ann, Irene, Connie, and Mary.