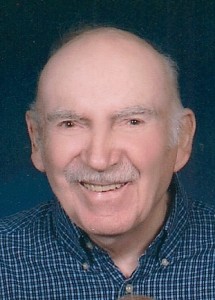 Kenneth W. Jarvis, age 85 a resident of Kenosha, went to his heavenly Father surrounded by his loving family on March 31, 2014 at the Hospice House Racine.

Ken was born on August 22, 1928 in Marinette WI. He was the son of the late Alfred and Pearl (Planky) Jarvis. The family moved to Kenosha when Ken was 14. He graduated from Kenosha High School in 1947. He served his country in the U.S. National Guard reserves from 1947-1954. On July 29, 1961 he married Dorothy Lyles at the Kenosha Court House. He became an instant step-dad to Becky Lyles and in May 1962 another daughter Darleen. He retired from Snap-on Tools after 37 years of employment as a machinist in the automatics department. Ken loved to bowl and he was a very well-known bowler in Kenosha. In March 1962 Ken and Bob Marescalco set a state doubles record of 1,441 pins. Ken also bowled on “Bowling With The Champs”. He loved to watch the NY Yankees, Green Bay Packers, ESPN Bowling and old westerns. He enjoyed painting with acrylics and trips to Las Vegas.

In lieu of flowers memorials to Hospice Alliance would be greatly appreciated.