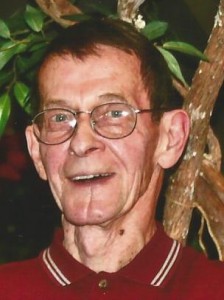 Ken was born on September 6th, 1932 in Kenosha to Arnold and Elsie (Schmidt) Petersen. He was educated in the local schools and on June 19th 1956, he was united in marriage with Chloe “Ann” Packenham at Friedens Lutheran Church. They were blessed with two sons, Keith and Kyle.

Kenny worked at Packy’s Stop in Winthrop Harbor until he purchased the store and operated it as Ken’s Kut Rate for 35 years. After he left the business, he worked for 20 years at The Spot restaurant near his home.

He was a lifelong member of the Wisconsin Evangelical Lutheran Synod and had belonged to Bethany Lutheran Church for over 40 years. He was an avid bowler and his passions included the Chicago Bears and the St. Louis Cardinals, but mostly his family and friends.

Ken is survived by his sons Pastor Keith (Jolene) Petersen of Watertown, SD and Kyle Petersen of Mission Hills,CA and by his grand children Tess, Faith, Samantha and Angelica Petersen as well as many nephews, nieces and friends.

Preceding Ken in death was his beloved wife Ann, his parents, his in-laws Floyd and Alice Packenham, his brother Gerald and a brother Robert in infancy.

In lieu of flowers, memorials to Bethany Lutheran Church or the Safe Harbor Humane Society would be appreciated.