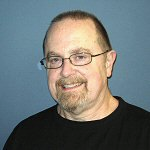 Kenneth E. Johnson passed away on his 63rd birthday on December 25, 2018 at his home surrounded by his family. Ken was born on December 25, 1955 in Jacksonville, FL to Glen B. Johnson and Thelma Raye Cullipher. Ken was highly educated and enjoyed learning as much as he could. He married Barbara Kodlubanski on November 24, 2014 in Kenosha. Ken was involved in different running and triathlon groups throughout his life, including the RecPlex 5K Series, Chicagoland Danskin Triathlon, Ironman Wisconsin, and the Chicago Tri Club. He was also a USA Triathlon certified coach and National Academy of Sports Medicine certified personal trainer. He was well known around the RecPlex. Ken loved swimming, scuba diving and making jewelry.

He was preceded in death by his parents, his sister, Carol Lyn Johnson, his maternal grandfather Thomas Elvin Perkins and his step-grandparents, Nanny Jones and Uncle Martin.

Ken is survived by his wife, Barbara of Kenosha; his daughter, Claire Johnson of Arlington, VA; his brother, Glen Martin Johnson; his niece, Brenda Gregory, as well as many friends.

In accordance with Ken’s wishes, services will be privately held.