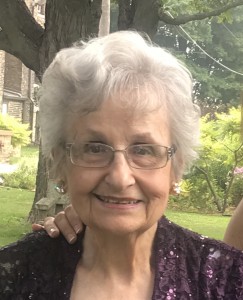 She was born in Kenosha to the late Giovanni and Mary (Delasorta) DeLoreto on April 17, 1926. As a child, Ann moved to Hayward, WI where she was educated in local schools. She eventually returned to Kenosha and worked at Simmons Bedding Company for several years.

Ann is survived by her loving husband, Albert, with whom she recently celebrated 60 years of marriage, and her children: JoAnn Canard, Norma Velvikis (David Marlowe), Kevin (Becky) Velvikis and Connie Velvikis. She is also survived by five grandchildren, Christine, Rachel, Stephanie, Ronny, Nicholas (Tovah) and Daniel, as well as two great-grandchildren, Brady and Hailey.

She was a member of Fellowship Baptist Church.

Ann’s family was very important to her, and she stayed at home to raise her children until they were in high school. She then worked part-time as a hostess at the Kenosha Senior Center. Ann loved to see people eat and was a fabulous cook who was known for her homemade ravioli. When a visitor came to the house, they were often eating within 10 minutes of walking in the door.

Funeral services will be on Wednesday December 26th, 2018 at 11:00AM at Fellowship Baptist Church in Kenosha. (1700-89th Street) Visitation with the family will be on Wednesday at the church from 9:30AM until the time of services. Burial will follow at Sunset Ridge Memorial Park.

The family would like to thank Casa del Mare, Right At Home and Hospice Alliance for their compassionate care, and Steve Casey of Casey Family Options for his friendship and assistance.

In lieu of flowers, memorials to Hospice Alliance of Kenosha or Villa Esperanza Family Services of Pasadena, California would be greatly appreciated by the family.