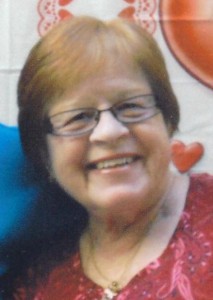 Karen S. Wozniak, age 71 a resident of Kenosha, passed away Tuesday January 2nd 2013 at her residence.  Born on July 17th 1941 she was the daughter of the late Ellsworth and Leota Marie (Pritz) Eberhardy.  On June 18th 1972 she married Edward Wozniak in Racine Wisconsin.  She was a homemaker and caregiver to her husband Edward who survives her at the Union Grove Veterans Home.  She was also employed for a time at Promotions Unlimited.  She had a great love of all things especially music and Andy Williams.   She was an active volunteer at the VA Center in Union Grove and brightened the lives of many veterans. She loved her family very much and loved traveling to Georgia for six months every year to spend with her daughter and family.  She is survived by her husband Edward of Union Grove; two daughters, Shelley (Rick) Bell of Duluth GA; Stacy (Doug) Juga of Pleasant Prairie; one stepson Randy Wozniak of Racine; one stepdaughter Kelly (John) Smith of Racine; grandchildren Chelsey and Chase, Logan and Kayla, Alex, Mindy and AJ,Courtney,Jared,Kelly and Jon Jon along with 7 great grandchildren. She is further survived by her sister, Gail (Tim) Kluessendorf of Racine; nephew David Kochanski of CA and niece Denise Escalante and her son Evan of AZ. She was preceded in death by her parents.

There will be a brief service on Tuesday January 8th 2013 at 1:00PM at Southern WI Veterans Cemetery in Union Grove. In lieu of flowers memorials to the family would be appreciated.