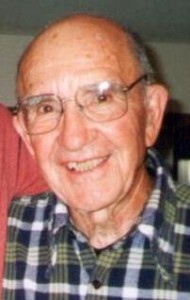 John was born December 20th, 1915 inKenoshato the late Dominic and Concetta (Flormo) Gaudio. He was educated in the schools ofKenosha. On July 24th, 1937, he was united in marriage with Blanche Gastaldi.

John was self employed at Dyna-Vac and had been previously employed at Simmons Corp. He was very involved at the Kenosha Senior Citizen’s Center and loved a good round of golf. He and his neighborhood friends loved to play Bocce Ball and won many awards for their expertise. John was a devout and active member of Our Lady of Mt. Carmel Catholic Church and served as an usher at the Saturday evening Mass until he was 94 and his health prevented him from attending. John loved gardening, was very proud of his giant tomatoes of which he would distribute to his neighbors. He was also known for his homemade pasta and sauce.

Preceding John in death were his parents, his wife Blanche a daughter Jeannine, one brother Louis and five sisters; Louise, Irene, Connie, Mary and Ann.

In lieu of flowers, memorials to the family would be appreciated with charities to be named at a later date.