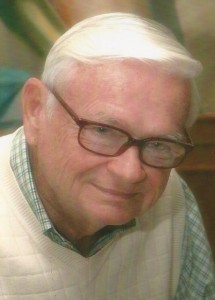 John Herbert Casey passed away peacefully at his home surrounded by family on August 21, 2012. He was born February 19, 1933 in Kenosha to the late Thomas and Blanche (Emery) Casey.

He worked for the Simmons Company and American Motors Corporation before entering the US Army in 1953, being honorably discharged after serving 17 months in Korea.

John attended the UW Extension Center in Kenosha for 2 years where he met his future wife, Gail Larsen. They were married in 1958 at St. James in Kenosha. After completing his college studies at UW-Whitewater with a degree in Elementary Education he taught elementary school in Edgerton, Wisconsin and at Weiskopf and Durkee schools in Kenosha. He held a lifetime license from the Wisconsin Department of Public Education.

In 1964, John began a new career with Jockey International as Cutting Room Supervisor, followed by Plant Manager, and Director of Manufacturing. In 1985, he was named Vice President of Human Resources, responsible for employees at all fourteen US locations. He was a licensed Leader Effectiveness Training instructor, teaching numerous classes while at Jockey. He retired in 1995 after 31 years of service .

John was a part owner of Casey Family Options Funeral and Cremations LLC.

Following retirement, John and Gail wintered in Arizona for eight years until they bought a home in Winter Haven, Florida, where they spent the past eight winters. They enjoyed traveling, visiting all 50 states, China, Russia, South and Central America, and many European countries, including three trips to Ireland where they took their family for their 50th anniversary. He and the entire family enjoyed 42 summer vacations at Robertson’s Cottages in Sturgeon Bay, most recently in early August 2012.

He enjoyed golfing, woodworking, reading and watching sports, but most of all John treasured his family and being with them. He watched his grandchildren at many youth sports events, school music concerts and dance recitals.

John is survived by his wife Gail, daughter Ann Casey (Rob Laux) of Madison, son Stephen Casey (Jennifer) of Kenosha, daughters Beth Casey, Jane Larsen (Eric) and Lynn Wilk (David), all of Kenosha. He is also survived by nine grandchildren: Michael John Herbert , Elizabeth and Thomas John Casey; Emily and John Laux; Casey and Sophia Larsen; Jackson and Audrey Wilk.; a brother James (Mary Ann) of Shorewood, IL and 13 nieces and nephews. He was preceded in death by his parents, his brother, Richard Casey, and his sister, Barbara Bostetter.

A mass of Christian burial will be celebrated on Saturday, August 25, 2012 at 10:00 a.m. at St. Mark Catholic Church (7117-14th Avenue, Kenosha) with the Very Reverend James Lobacz officiating. Visitation with the family will be on Friday at the church from 5:00 p.m. until 8:00 p.m. and again on Saturday at the church from 9:00 a.m. until the time of mass. Private burial will take place at Southern Wisconsin Veterans Cemetery at a later date.

In lieu of flowers, memorials to St. Joseph Academy, St. Mark Catholic Church, the Rotary Foundation or to Hospice Alliance would be appreciated.

May the road rise up to meet you.
May the wind always be at your back.
May the sun shine warm upon your face,
And rains fall soft upon your fields.
And until we meet again,
May God hold you in the palm of his hand.