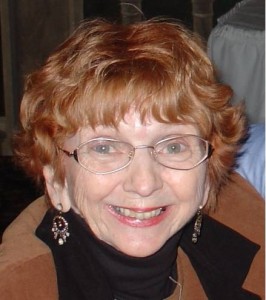 Born on January 31st 1930 in Baraboo WI, she was the daughter of the late Milo and Linda (Thurer) Simonds.

She was educated in the schools of Baraboo and came to the Kenosha area in 1960.

On February 28, 1976, she married Walter Haag at First United Methodist Church in Kenosha. He preceded her in death on May 8, 2002.

She was a Tupper Ware sales manager for many years. She was also a manager at Adelmanâ€™s Dry Cleaning in Kenosha. In addition she worked at Dr. Ferwerdaâ€™s office as an Optician and owned and operated the Optical Shop in Racine.

Joan and Walter were members of Pleasant Prairie VFW post 7308 where she served as president of the Ladies Auxiliary. She loved to sing and she also loved to sew and make afgans. Joan was an avid Green Bay Packer Fan and she was very proud of her Irish heritage. She loved her grandchildren and great-grandchildren and treasured spending time with them. She loved being a Catholic was a long time member of St. Peters Catholic Church.

She was preceded in death by her parents and two sons.

A Mass of Christian Burial will be celebrated on Wed. May 23rd 2012 at 11:00AM at St. Peter Catholic Church. Visitation with the family will on Wednesday at the church from 10:00AM until the time of mass.