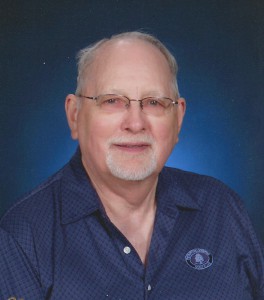 Having fought severe heart issues in the past several years, James Scheibl died early Sunday morning, December 29, 2013. Instead of singing in the choir that morning, he sang with the angels. Jim was born in Fond du Lac, WI, October 13, 1937 to John and Adelia Dickmann. He grew up in Sheboygan, WI, where he learned his love of music, his talent for singing and playing the organ and other instruments, his love for the outdoors, fishing, and getting along with people.

He attended the UW-Extension in Sheboygan for two years and then joined the Air Force where he served in Libya and Scotland. When he completed his enlistment, he returned to WI to finish college at UW-Madison where he also found part-time employment as organist for the chapel on campus. He also joined the National Guard and served for many years with them.

Upon completing his education, he married Gertrude Bryll in Sheboygan. She died in 1975. He took employment with Ladish Tri-Clover in the Human Resources department in 1967. He’s been a Kenosha County resident ever since. He retired from Tri-Clover in December of 1997 as Director of Human Resources.

Jim’s desire for a strong family solidified with the birth of his son, Stephen in 1973. In 1979 he married Mary Jo Morris and his family expanded with three stepsons and her close-knit, large extended family. Jim quickly excelled at being the best uncle, brother-in-law, son-in-law, and stepdad.

He had perfect pitch and loved singing, all types of music, and played several instruments. He loved negotiating and problem solving. He enjoyed reading, especially mysteries and non-fiction. Fishing and hunting were a must—an excuse to enjoy the outdoors. He always had a smile and often a joke to tell that took too long in the telling. He loved his family, life, his country.

Jim will be missed by all those who mourn him—his son, Stephen, his wife Mary Jo, his stepson Steven Morris and his grandson, Remington Quinn Morris of Anchorage, Alaska; his three sisters-in-law, his brother-in-law, two nieces, four nephews, three step-nephews and their families, and many lifelong friends. Jim celebrates New Years with those who preceded him—his parents, first wife, and stepsons John Morris and Jim Morris.

A Mass of Christian Burial will be celebrated on Friday January 3rd 2013 at 11:00AM at St. Peter Catholic Church in Kenosha. (2224-30th Avenue) Friends and family are asked to meet at the church.

Visitation with the family will be on Thursday evening January 2nd 2013 from 5:00PM until 7:00PM at the Kemper Center Founders Hall in Kenosha. (6501-3rd Avenue)

In lieu of flowers, memorials to either the Inns Program or St. Joseph Academy would be appreciated.