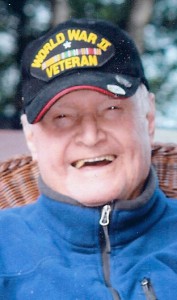 Passed away peacefully at home on December 31, 2013 surrounded by his loving family.  A lifelong resident of Kenosha, he was born on September 28, 1923 to Margaret (Lewis) & Edward Weise.  He was the youngest of three children, brother to Janet Wyss and Forry Weise.  He met the love of his life at age 12, Joan Brittle.  They married February 26, 1944 and had celebrated 66 years of marriage before her death in June 2010.   She remained the love of his life until he died.

Gene was educated in the Kenosha schools and was very proud to be the quarterback of his Bradford High School team.  Growing up in the depression he started working at an early age.  He had various jobs throughout his life; sweeping floors in his step-father’s tavern, bartending, stock-boy at Bernacchi’s Pharmacy, a metal worker at American Brass.  But he will be remembered most as a co-owner of Brittle’s Recreation, a liquor salesman for Kenosha Liquor and a court bailiff for Judges Baker and Warren, finally retiring at the age of 86.

Gene believed in staying active and belonged to many organizations during his 90 years.  He served the Tavern League of Wisconsin as treasurer and president.  He was a member of the Elks Club, Moose Lodge, Restaurant Association, and VFW.  In his younger years he enjoyed being on many bowling leagues and softball teams.  He loved “putzing” around at home or in his garden.  He had a passion for playing cards especially cribbage and winning “the crown” which he has now taken to heaven.  He was eternally optimistic when it came to “da Bears,” his favorite NFL team.  He loved the jokes that the Bear/Packer rivalry produced.  How fitting that on his dying day he received an “anonymous” note in the mail that simply said 33-28 (the final score of the last Bear/Packer game, thanks WWW for the laugh).  Most of all Gene loved his family and country.

He is survived by many nieces, nephews, friends, and neighbors who called him Gene, Geneco, Geneski or the Great Gardini.  Gene was a man of few words, but always had a joke to tell, a twinkle in his eye and a smile on his face.  He will be dearly missed by all.

In April 2012, Gene took the “Honor Flight” for WWII veterans to Washington, D.C. with his son, Tom.  He was so thankful that so many people acknowledged his war efforts but felt he didn’t deserve the attention.  He was proud to serve his country because to him, it was the right thing to do.  In lieu of flowers please make donations to the Stars and Stripes Honor Flight of Wisconsin, PO Box 636 Port Washington, WI 53074 or online at: http://starsandstripeshonorflight.org.

The family thanks Dr. Ziehen, his nurse Karla, Dr. Mariani, and his nurse Jacenta for their compassionate care of our Dad over the years.  Thanks to Hospice Alliance, especially Julie Feuerbach for her expert care and kindness.  We greatly appreciate our sister Nancy, her husband Ed and their children for opening their home to our parents and taking such great care of them until their deaths.

“If ever there comes a day we can’t be together, keep me in your heart, I’ll stay there forever.”