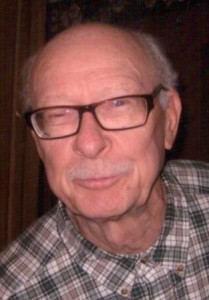 He was born on November 10th 1937 in Herod, Illinois to Orval and Eva (Robinson) Milligan. He grew up on his family farm in Southern Illinois and attended school in a country one room school house. His mother died when he was a young boy. His family moved to Whiting, Indiana where he became a life long Chicago Cubs and Chicago Bears fan. His family returned to Illinois and later moved to Union Grove, Wisconsin. He graduated from Union Grove High School.

He married Arleen Wolfe at St. Mark’s Catholic Church, Kenosha and they had one daughter, Sheri (Carl) Holborn. They later divorced. In 1996, he married Leah Laybourn at First Assembly of God, Pleasant Prairie.

He was employed at American Motors Corporation until he retired in 1991. He was a supporter of worker’s rights and quickly became involved in union politics. He served as Steward, Chief Steward, Financial Secretary, Vice President and Interim President  United Auto Workers Local 72.  Before his retirement he served on the U.A.W. International Board. After his retirement, he served on Board of Directors at AM Community Credit Union.

After retirement he had more time to enjoy his passion-golf. He also spent his time watching his grandson play basketball and football. He was a member of the Kenosha YMCA where he enjoyed exercising with his daughter and visiting with friends. He was considered a polite gentleman by everyone who knew him.

He is survived by his wife Leah of Pleasant Prairie, one daughter Sheri (Carl) Holborn of Kenosha; one grandson Carl; step grandsons Tristan Skeans and Tyler Allen; and by his brother William (Marge) Milligan of Elgin, Illinois. He is survived by loving nieces and nephews. He is also survived by close friends he loved as family-Michelle Prescott, Jacob (Heather) Skeans, and Linda and Gary Holtz.

He was preceded in death by his parents Orval and Eva (Robinson) Milligan; three brothers Bob, Randall, (Faye) Gene (Theresa); and two stepsons Bryan and Sean.

Herschel’s family would like to thank Dr. Rosanna Ranieri, Dr. Leena Joshi, and staff of St. Catherine’s Dialysis Center for their loving and quality care.