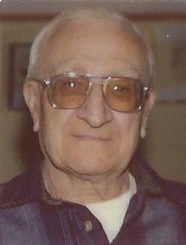 Hank was born on July 22, 1921; one of seven sons born to the late Henry C. and Hilda (Bittner) Springer inAthensWI. He served in the U.S. Army during World War II.

On August 1, 1942, he was united in marriage with Lorraine Pedersen at St. Mary’sLutheranChurchinKenosha. They were blessed with seven children. Hank made his living as a truck driver, retiring in 1981 from Kenosha Cartage Co. He was a member of Moose Lodge 286 and the Somers Rod and Gun Club.

Hank was preceded in death by his wife Lorraine, his parents, five of his brothers and his grandson Robert Jr.

A service of Christian Burial will be held on Tuesday July 23, 2013 at 11:00AM at St Mary’s Lutheran Church (2001-80th St.). Visitation with the family will take place at the church on Tuesday from 10:00AM until the time of the service. Burial atSunsetRidgeMemorial Park will happen immediately following the service.