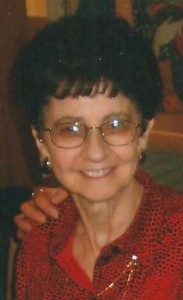 Helen Madeline Langenbach, age 79, a resident of Kenosha, peacefully passed away on December 6th, 2012 at the home of her daughter and son-in-law, while surrounded by her loving family.

Born on July 21st, 1933 in Racine, Wisconsin, she was the daughter of the late Peter and Angeline (Bucheri) Dacquisto.  She was a 1951 graduate of St. Catherine’s High School in Racine.  Upon graduation, she was employed as a tour guide for Johnson Wax Corporation.

Helen was a devout Catholic and a member of St. Mary Catholic Church.  She was a proud mother, grandmother, and homemaker. She also worked as a home fashion consultant at Sears for many years, before retiring in 2002. She valued the many friendships that were fostered while attending Sears’ breakfast clubs and Snap-On retiree events. Her hobbies included playing cards, bowling, dancing, and shopping.  Later in life, she became a reliable movie critic for her family and a Game Show Network fanatic. She also enjoyed watching Dancing with the Stars.  Her grandchildren were the pride and joy of her life.  Helen faithfully followed each of them through their academic and athletic accomplishments. Two of her most precious companions were her loyal grandpuppies, Max Johnson and Daisy Buratti.

A Mass of Christian Burial will be celebrated on Saturday December 15th, 2012 at 11:00 a.m. at St. Mary Catholic Church. Visitation will also be held at the church on Saturday from 9:30 a.m. until the time of Mass. Burial will follow atSunsetRidgeMemorial   Park.

In lieu of flowers, memorials to Hospice Alliance would be greatly appreciated by Helen’s family.