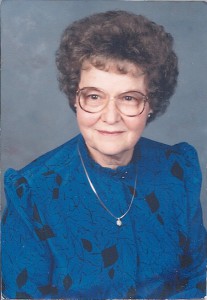 Hazel L. Sicilia, age 92 a resident of Kenosha, died peacefully while surrounded by her loving daughters on Friday, February 15th 2013, at Manor Care in Kenosha.

Born on October 11th 1920 in Valders WI, she was the daughter of the late Angelo Raffaele (Ralph) and Adelia Spadafora

She came to Kenosha as a young child and has resided here since. She was educated in the schools of Kenosha and was a graduate of Kenosha High School. She was a member of Our Lady of Mt. Carmel Catholic Church and also a member of the Ladies Society.

She was proud of her role as wife and mother.  But most of all her greatest joy was her role as a grandmother and great-grandmother.   Her life revolved around her family.  Her family will always remember her wonderful baking and cooking skills, especially her cream puffs.

After raising her family, she was employed as a nurse’s aid at the old St. Catherine’s Hospital for many years.  Later in life,  she worked at Mt. Carmel Day Care.

She was preceded in death by her husband; a daughter in infancy; and son Ben.  Also preceding her in death were  her parents, brothers Raffaele; John (Jack); Amedio (Ame); Ralph Jr.  One sister Carmela Hanson.  Also several brother and sister-in-laws.

The family would like to extend their sincere thanks to Manor Care and Seasons Hospice for the loving and compassionate care given to our mother “Hazel Nut” … and one final warm wish from Hazel …”I love you a bushel and a peck and a hug around the neck, that’s how much I love you!”