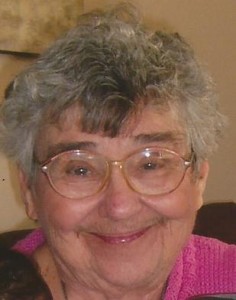 She was preceded in death by her parents, Ed, son Timothy, and her brothers Wally, Donald, and Jack.

Grace lived a very religious and active life, always a very caring person to one in need actively involved with the Church and helping others. She loved playing cards, especially bridge and enjoyed every opportunity to teach someone the game. Her bridge club still got together after some 50 years. She was a member of the choir at St. Thomas and active in St Mary’s Catholic Church later.

Grace continued to volunteer to assist at Brookside Nursing Home for Masses, volunteered at the Kenosha Soup Kitchen. She loved to cook and experiment with new receipts, looking to family to experiment with. She enjoyed spending the winters in Florida with family and friends, spending time with her many nephews and nieces.