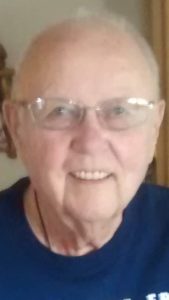 Glen “Buck” Gotsche passed away on Monday, November 9, 2020, two weeks before his 95th birthday, at Brookside Care Center. Glen was born in Kenosha on November 23, 1925 to the late Oren and Helen (Ordy) Gotsche. He attended local schools and graduated from Kenosha High School in 1943. Glen served in the United States Marine Corps in WWII from 1943 to 1946. His 5th Marine Division landed on Iwo Jima and fought the entire 36 day battle which was a pivotal point in winning the war because our planes could land there to re-fuel and go on to Japan. It was the bloodiest battle of the war and Glen was always proud that he had been a part of it. When the war ended, his division was assigned to occupation duty in Japan. Glen was honorably discharged from the Marine Corps in 1946. He joined the Naval Reserve and was recalled to active duty in the Navy during the Korean Conflict. He served aboard the hospital ship U.S.S. Repose from 1950-1952.

Glen married Linda (Tyler) Marshall in 1977. He was previously married to Patricia Johnson in 1947 and they had a daughter, Sandra, and later divorced. In 1955 he married Nell (Ignatovich) Jurik and had a daughter, Nancy. Nell passed away in 1974.

Glen worked at grocery stores and American Motors in his early years. He joined the US Postal Service in Dec. 1953 and retired as a Window Clerk from the Kenosha P.O. in July 1984.

Glen was a lifetime member of the VFW Post 1865, the American Legion Post #21, Moose Lodge #286, and N.A.R.F.E. (National Association of Retired Federal Employees).

Glen was chosen the Kenosha “Hometown Hero” by the Mayor’s committee in July 2018 for his military and community service through the years. He was honored by the VFW post with a ceremony there and a motorcycle escort by the VFW Riders to the Municipal Building. During a televised City Council meeting, the Mayor presented him with the award.

He was a Classic League bowler, enjoyed golf and was an avid fan of Wisconsin sports teams.

Glen enjoyed spending time with his family, especially playing cards together, and trips to the casino! His greatest joy was time spent with his grandchildren, not only taking them miniature golfing, scratching the occasional lottery ticket together, playing “M&M Poker” with the kids (his invention!), but always being their biggest and proudest fan at their many sporting and musical activities.

Glen was also preceded in death by his daughter, Sandra Gotsche; his brother, Robert Gotsche; and stepson, Tim Marshall.

The family would like to extend their appreciation to all the caring staff at Brookside Care Center, especially the 200 hall of the Memory Care Unit, for their loving kindness and exemplary care and the “Fun Girls” of the Life Enrichment Department who made it possible for FaceTime and outdoor visits and took such amazing care of him when the family was not able to be with him in person due to Covid restrictions.

To keep everyone safe, a private funeral service was held.  Internment was at Sunset Ridge Cemetery with full military honors.

In Glen’s memory, the family wishes everyone to always remember and appreciate the sacrifices made by all veterans by supporting local veteran charities or local charities of your choice.