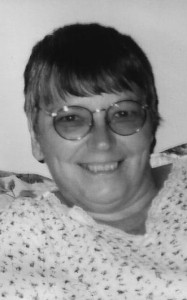 On May 10, 1969 she was united in marriage with Thomas Rotunda in Kenosha. Outside of raising her family, she worked as a housekeeper for many years for Total Cleaning.

Georgie was a very joyful person. She loved to go out dancing with her friends and to hear her husband play in bands. She loved to go to concerts and went with Thomas to see Jimi Hendrix and Janis Joplin when they first met. She enjoyed “Scoopin’ the Loop” with her sister Donna and going to car shows with her family. Georgie had a passion for wrestling on TV and everyone knew not to disturb her while she was watching.

Christmas was Georgie’s favorite time of year and her family remembers how much she loved it. She was very fond of her Westies; Peaches and Precious and her “grand-dogs” Lucy, Sam, Lila, Woofie, Kain and Choochoo; and her grand cats Ibanez and Mikey.

Georgiana is survived by her husband Thomas, her son Jason and her daughter Kelly as well as her brother Rodney (Susan) Ziehr and her sister Donna (Glen) Wilson.

She was preceded in death by her parents and by her brother William “Bill” Ziehr.

Funeral services will be held on Monday December 30, 2013 at 6:00PM at the Kemper Center Founders Hall. (6501 3rd Avenue) Visitation with the family will be held on Monday in Founders Hall from 4: 00PM until the time of services. Burial will take place on Tuesday December 31, 2013 at 10:00AM at Sunset Ridge Memorial Park. In lieu of flowers memorials to the family will be appreciated.