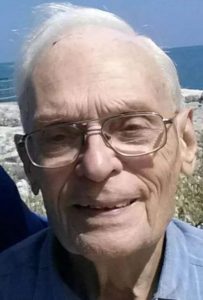 Franklin Page Gail, age 93, of Kenosha passed away on Friday morning, December 27, 2019 at Hospice Alliance – Hospice House with his family by his side. Franklin was born on March 5, 1926 in Hinsdale, IL to Arthur N. and Mary (Page) Gail. He was educated in the schools of Kenosha and graduated in 1944 from Mary D. Bradford High School. Franklin also attended and graduated with his Bachelor’s degree from U.W.-Madison. He served in the United States Army Air Force during World War II, specifically the Pacific Theatre. He worked for many years as an agent at French and Gail Insurance Agency (later known as Gail General Insurance) and at St. Matthew’s Episcopal Church in Kenosha.

In 1959, Franklin was elected president of the Kenosha Jaycees, and was also the general chairman and director of the Miss Wisconsin pageant held in Kenosha in 1959 and 1960. He also served as the official escort for Miss Wisconsin to Atlantic City, N.J. those years, accompanied by his younger sisters.

Franklin is survived by two step-sons, Martin and David Sokol of Texas; three sisters, Shirley Gail, Joyce Istvanek, and Patricia Christiansen of Kenosha; as well as many nieces, nephews, and friends. He was preceded in death by his parents; two brothers, John Gail and Fred Ecklor; and his sister, Jean Phipps. Franklin will be missed by all who knew him, especially for his compassion and kindness.

A Memorial Mass for Franklin will be held at 11:00 A.M. on Friday, January 3, 2020 at St. Matthew’s Episcopal Church (5900 – 7th Avenue). A visitation with the family will be held at the church on Friday from 10:00 A.M. until the time of Mass. In accordance with Franklin’s wishes, he requested no flowers but any donations to be made to St. Matthews.