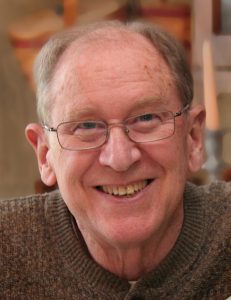 Carson Rohde, age 85, of Kenosha passed away on Tuesday, December 31, 2019 at Kenosha Senior Living with his family by his side.

Born July 13, 1934 in Kenosha, Paul Carson Rohde was the son of the late Paul and Jennie (Hansen) Rohde. Carson and his wife Edna shared more than 62 loving years of marriage. They cherished their life together, and he missed her dearly after she preceded him in death on Nov 21, 2019. He attended Kenosha schools and graduated as an Industrial Electronics Technician from DeVry Technical Institute in Chicago.

Carson spent many summers at Camp Oh-Da-Ko-Ta as a camper, and also served as waterfront director and emergency services director. He earned his Eagle Scout award and 2 palms. He was a vigil member of the Order of the Arrow and led Kenosha’s Sea Scout ship. The traits of an Eagle Scout truly describe Carson’s character throughout his life: trustworthy, loyal, helpful, friendly, courteous, kind, obedient, cheerful, thrifty, brave, and reverent.

Carson was employed at American Motors in the Plant Engineering department for more than 33 years until his retirement in 1987. From 1988 until 1993 he was realtor at Bear Realty. He was a member of St. Mary’s Lutheran Church in Kenosha. Carson volunteered his time generously. He was a member of Scout Leaders Rescue Squad for over 60 years, serving as Chief and Development Director for decades. He was one of the first registered Emergency Medical Technicians in Kenosha County, and a member of Kenosha County Emergency Medical Services Advisory Board. He was an Advanced First Aid instructor and an Instructor Trainer for many years. He was a past member of the Lakeshore Chapter American Red Cross executive board and served on the United Way board. He was a Certified Engineering Technician, Member of Gateway Technical College Welding Advisory Committee, and past chairman of Racine-Kenosha Section of American Welding Society and American Motors Supervisor’s; Club.

He is preceded in death by his parents and his beloved wife.

Funeral services for Carson will be held at 11:00 A.M. on Friday, January 10, 2020 at Lord of Life Lutheran Church (5601 Washington Rd). Visitation with the family will be held at the church on Friday from 10:00 A.M. until the time of the service and at the church on Thursday, January 9 from 5:00-7:00 pm. Burial will take place at Green Ridge Cemetery following the service. Memorials to Scout Leader’s Rescue Squad (3019- 45th Street, Kenosha, WI  53144) would be appreciated.

The family wishes to extend a heartfelt thank you to the staff at Kenosha Senior Living and Hospice Alliance for their compassionate care of Carson.