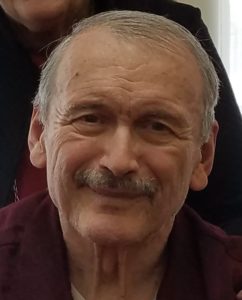 Edmund L. Gesicki, 81, of Pleasant Prairie, passed away peacefully with family at his side at Parkside Manor on Sunday, January 10, 2021 after a seven year battle with Alzheimer’s.

Born on September 11, 1939 in the Town of Rietbrock, WI; he was the son of the late Edmund and Angeline (Handlosky) Gesicki. He graduated from Athens High School in 1957.

Edmund served in the United States Army from October 11th, 1962 until he was honorably discharged on September 26, 1964  after serving in Korea.

On February 4, 1967 he married Carol Jagodinski in Marathon, WI.

After working at Marathon Cheese Corp. in Marathon, he was employed by Chrysler for 41 years until his retirement.

Ed was a member of St. Mark Catholic Church. He was an avid fan of the Green Bay Packers and Milwaukee Brewers and enjoyed golfing, bowling and being outdoors.  He was very good hearted and enjoyed family reunions and time with his children and grandchildren.

The family would like to thank the staff at Parkside Manor and Hospice Alliance for the compassionate  and kind care they gave to Ed.

In lieu of flowers, donations can be made to St. Mark Church, Kenosha: https://stmark-kenosha.org/ or Hospice Alliance, Pleasant Prairie, WI: https://www.hospicealliance.org/

A memorial service will take place when it is safe to gather. Please check the funeral home’s website in June or July for service times to be posted.