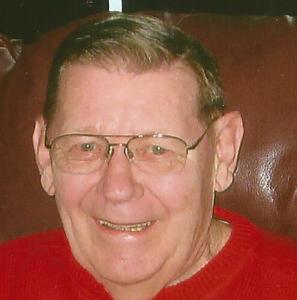 What stories lie between these years…

Born on August 21, 1926 to Leo and Leona McPhaul in Kenosha.  Schooled at St. Mark and local schools, Don graduated in 1944 from Kenosha High. Wanting to enlist in the US Navy but being only 17 years ole, he needed his mother’s permission.  She made him promise “No tattoos” and so to this day he had “No tattoos”.  He served as a signalman on the destroyer Lowery in the South Pacific, being discharged on 6/6/46.  During the Korean War, he was recalled to serve one year restoring a moth-balled destroyer needed for active duty.

In the fall of 1946 he began college studies at Kenosha’s University of Wisconsin Extension, meeting his classmate Arvella Rudgal.  She dropped her pencil on the floor and the two knocked heads picking it up. POW! They dated and were married on August 13, 1946.  “Only” lasting 65 years!

Don worked at Great Lakes and the Nash/American Motors in the Engineering and Export Departments.  Occasionally traveling to plants inMexico,Argentinaand evenIranwhere their cars were assembled.  It was interesting but there was no place like home!

His interests were varied as he played softball for Mac Zipper team as a pitcher; enjoyed the Motors bowling and golf leagues; volleyball, tandem bike riding; square dancing too! Playing Sheepshead with the same group of five friends for over 30 years.

He was a member of St. Mark Church and Sacred Heart of Jesus church inHot SpringsVillage, Ar.

Retiring in 1988 to Arkansas, he and Arvella enjoyed milder winter weather, new neighbors and friends and particularly the 8 golf courses in their community.  Summers brought family and grandchildren visiting.  Health problems arose and Don and Arvella moved back toKenoshain the fall of 2008.

Don belonged to his church men’s clubs, acting as head usher also.  He was a member of the AM Supervisors Club, Elks Club, the VFW and worked on the boards of AM CreditUnionand St. Mark Credit Union.  He was active in reviving the CYO group at St. Mark Parish.

A devoted fan of the Packers, Brewers and University of Wisconsin teams he made a second generation of 3 daughters and families avid Packer backers too!  On Sundays all gathered to cheer the team on – even dancing around with grandbabies in arms when the team scored a touchdown!

Don loved his girls – Jane, Carol and Donna.  He teased that he was outnumbered, as even the family dogs were females.  Deep down he really loved it!  He loved to read all types of books, John Wayne movies, a two olive martini, plus a good steak dinner.

He was preceded in death by his wife Arvella who welcomed him into eternal life on her birthday!

The family would like to thank the fabulous staff at Brookside Care Center for their loving care of dad for these last years. Words cannot express our appreciation for Delores and Janice who loved him like we did!

Memorials in Don’s name can be made to the Wounded Warrior Project, since he proudly served our country, St. JosephCatholicAcademy, as Catholic education was important to him or theBrooksideActivityCenter.