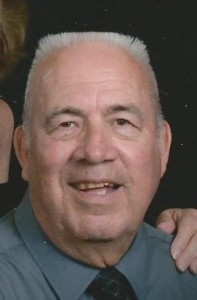 Donald Lee Hansche was born in St. Catherine’s Hospital to Donald and Ruth (Rhode) Hansche on November 21, 1936. He lost his battle with chronic lung disease and was raised into the loving arms of our Lord on September 22, 2018.
Don lived his entire life in Kenosha County where he attended Roosevelt Elementary, Lincoln Junior High, and graduated from Bradford High School. Don met his true love, Judy (Riese) Hansche, at the age of five. They lived on the same street, five houses apart, until they were married at St. Mary’s Lutheran Church on Valentine’s Day, February 14, 1958. Don and Judy moved to Bristol in 1965 where he enjoyed his final days. Judy has the comfort of over 70 years of memories to console her.

Don and Judy were blessed with three children, Diana (Gary) Christofferson, Ronald, and Randy (LuAnn), who are deeply mourning the loss of their “Pa”. His grandchildren and great-grandchildren brought him great pride and joy. Papa Don will be greatly missed by Ryan (Ann) Andrekus, Alyssa (David) Krupp, Ronnie, Nicole, Joshua Christofferson, Marissa (Brian) Alberti and Kyle. Cherishing memories of fishing and catching fireflies with Great Papa Don are Alex, Phoebe, Roslind, Ellie, Haley, Tyler and Jena. “Donny” was a beloved brother to Margo Klobuchar, and Jeff (Phyllis) Hansche. He was the favorite “Uncle Donny” to numerous nieces and nephews who will miss his silly joke and antics. Don was preceded in death by his parents and his brother Bill.

Don served in the United States Army from 1955 – 1957, and was stationed in Germany. He was employed at American Motors from 1954 until his retirement in 1988. After his retirement, he returned to Chrysler and worked part-time for Quality Services. At the time of his passing he was employed part-time by the Town of Bristol at the recycling center so he had a few extra dollars for casino bus trips and lottery tickets.

Don was a dedicated fan of the Green Bay Packers and the Wisconsin Badgers, and his baseball devotion waned between the Chicago Cubs and the Milwaukee Brewers. On any given Saturday or Sunday, you could find a group of friends and family sharing the thrill of victory and agony of defeat in Don’s garage.

Don was a dedicated servant to his community where he was recognized as an honorary member of the Bristol Fire Department and was honored as Bristol’s Outstanding Man in 1988. He was always lending a helping hand behind the scenes with Bristol Progress Days, the 4-H club, cub scouts, and his son’s baseball teams.

Don was a man of strong faith in our Lord. He was a faithful member of St. Mary’s Lutheran Church where he served as an usher and was a member of the kitchen crew for St. Mary’s Friendly Center for over 20 years.
Don was a humble man with very basic needs – family, friends, faith and fishing were all he needed to make his life complete. He felt a strong bond to nature and the outdoors where he enjoyed gardening, hunting, fishing and the comfort of a warm bonfire on a chilly fall evening. There is a big hole in the hearts of all that love him so dearly, but if you listen closely on your walk through the woods, or while holding your fishing pole over the quiet waters, you will be comforted by the echoes of his laughter, the calm of his voice and a quiet jingle – another angel has received his bells.

Don’s family extends their heartfelt gratitude to Dr. Joe (Garretto) for many years of warm, compassionate and loving care. Additionally, sincere appreciation is extended to Dr. Joshua Bloom for his kindness and empathy ensuring his comfort and ability to live a good life in the face of a debilitating disease.

Funeral services will be on Wednesday September 26, 2018 at 6:00PM at St. Mary’s Lutheran Church in Kenosha. (2001-80th Street) Visitation with the family will be on Wednesday at the church from 3:00PM until the time of services. Burial will take place later at South Bristol Cemetery.