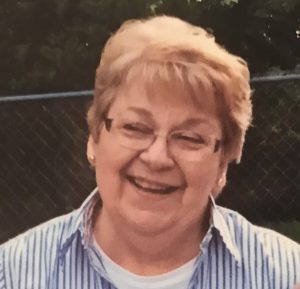 Diana A. Kreger, 85 nee Bennett a resident of Pleasant Prairie died on December 13, 2019, at her home surrounded by her loving family.

Diana was born on November 28, 1934, in Milwaukee Wisconsin to Anne Mae (nee Walte) and Roderick Malcolm Bennett and was educated in the Milwaukee schools.  She was a graduate of Pius XI high school.  Diana moved to Kenosha in 1969.  In 1972 Diana accomplished one of her lifelong goals when she graduated with her LPN degree from Gateway community college followed by an Associate Nursing Degree in 1986.  On April 19th, 1986, she was united in marriage with Eugene L. Kreger.

Diana loved being a nurse and she worked in a number of positions at Kenosha Memorial Hospital, St. Catherine’s Hospital and ultimately became an occupational health nurse.  While working as a nurse at the Kenosha Power plant she met the love of her life, Gene Kreger. She finished her career at the American Brass Company.

Many things in life gave Diana great joy especially her love of the Lord, her cherished family, her extended church family from Crossways Community Church, her care groups and her many treasured friends.

Diana’s family extended far beyond her husband and children.  It includes many nieces and nephews that considered her another mom, her children’s friends who grew up in her active and loving household and her many beloved friends, many of who have been in her life since her childhood.

Preceding Diana in death were her beloved husband Gene, her parents and her sister Gail Bennett.

The family would like to give special thanks to all of the wonderful friends who generously gave their time, energy and compassionate support to Diana and her family.  Special thanks to Mandy, Lexie and Bobbie for their wonderful care in the difficult last weeks.
Funeral services will be held at 4:00 P.M. on Tuesday, December 17th, 2019 at CrosswayCommunity Church in Bristol, WI. (13905-75th Street). Visitation with the family will be on Tuesday at the church from 2:00 P.M. until the time of services. Private burial will take place at Highland Memorial Park in Brookfield, WI.

In lieu of flowers, donations to Crossway Community Church or Hospice Alliance would be appreciated.