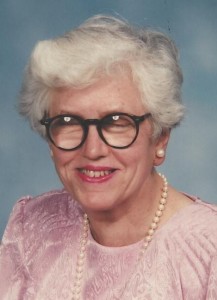 Born on November 8th 1925 in Kenosha she was the daughter of the late Carl and Lena (Daum) Stein.

She was educated in the schools of Kenosha. On November 29th 1947, she married Lester W. Wade at Immanuel United Church in Kenosha. He would precede her in death.

She was rich in her faith and her church was very important to her. She was very religious and had taught Sunday school at one time. She was also active in BOLD, (Blind Outdoor Leisure Development), a social group for the blind and attended the monthly dinners.

She was preceded in death by her parents; her husband in 1996; one son, Dennis Wade in 2005 and a sister Arlene Early.

Funeral services will be held on Wednesday July 25th 2012 at 10:00 AM at Immanuel United Methodist Church in Kenosha. (5410-Sheridan Road) Visitation will be held on Tuesday evening at the Kemper Center Founders Hall at 6501-3rd Avenue from 5:00PM until 7:00PM, and again on Wednesday at the church (Immanuel United Methodist Church) from 9:00AM until the time of services. Burial will follow at Sunset Ridge Memorial Park. In lieu of flowers, memorials to the family would be appreciated.