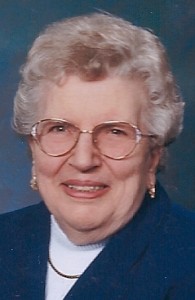 Born on July 3rd 1926 in Plainview MN, she was the daughter of the late Alvin and Edna (Carsten) Adler.

She was educated in the schools of MN. She married Walter Schmauss in Millville MN on March 5th 1949. They would relocate to the area to begin their life together. She was a homemaker her entire life. She loved music and crocheting. She was an excellent baker, as her family would attest. She enjoyed playing cards and especially loved spending time with her family.

She was preceded in death by her parents, two brothers Dallas and Marlin, two sisters, LaDonna and Linda, one grandson Tim and a great grandson Steven.