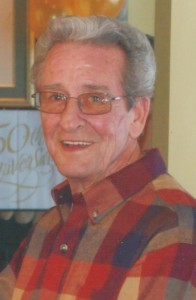 He married Karen Konkel, in Kenosha WI and they celebrated their 50th wedding anniversary with their family in 2010. They have been residents of Kenosha WI for more than 50 years.

Dale was in the U.S. Navy and he worked at J.I. Case for 30 years before retiring in 1992. He later worked at Sunset Ridge Cemetery in Kenosha with several of his brothers. He enjoyed deer hunting and he taught his son and grandsons to share his enjoyment of hunting and the outdoors. He enjoyed spending time at their cabin in Portage WI. He was always on the lookout for a new truck or interesting treasures which he could fix up and enjoy, and he loved animals of all kinds.

Dale is survived by his wife Karen and his four children, Tammy (Mark) Buthman of Southlake TX and Dale (Janice) Nichols Jr, Terri Nichols, and Glenda Wilson, all of Kenosha WI.

His ten grandkids/great grandkids looked up to Grandpa and they were the joy of his life-Sarah, Sam and Molly Buthman of Southlake TX; Lindsey (Dave) Fox and their son Colin; Lori Ptak and her son Aiden; Abbie Wilson; and Joshua and Jeremy Nichols.

At Dales request, there will be no service.