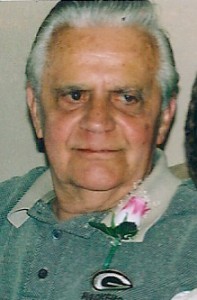 Chester was born on October 8, 1930 to the late Casimir and Marianne (Graczan) Piechowski in Chicago, IL. On July 9, 1955 he married Alice Greenwood at St. Johns Church in Bellaire, OH.  Chester enlisted into the Army and was stationed in Germany during the Korean War in the early ’50’s.  He was employed at AMC for over 20 years and was a member of  UAW Local 72.  He was a member of Our Lady of Mt. Carmel Catholic Church, a former member of St. Thomas Catholic Church and a member of the Knights of Columbus.  He was a volunteer for Meals on Wheels.

Grandpa “achoo-choo” loved to play cards, poker in particular and checkers.  He was given the name “Cheatin’ Chet” by his beloved grandchildren.  He loved traveling the state with Alice in search of Casinos.  It was a fun sport, keeping him “off the streets.”  He always kept his promise to Alice to get her to her Greenwood Family Reunions in Bellaire, Ohio annually.  Chet loved country music and enjoyed watching music shows on TV with Alice in the evenings.  Fond memories of dad and mom sitting in front of the TV, watching the Lawerence Welk Show will forever make us smile.

Chester was preceded in death by his parents, grandson, Michael McClain, two brothers, Arthur and Harry and two sisters Dorothy and Evelyn.

A complete obituary will appear in the Wednesday edition of the Kenosha News.