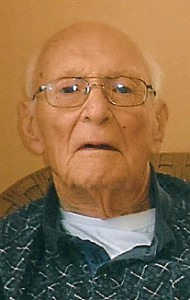 Charles was born on September 9, 1926 to the late Charles W and Frieda (Williamson) Jennings in New London IA. On August 26, 1946 he married Vivien Swedenberg who preceded him in death in 2011. Charles served his country in the U.S. Navy and the U.S. Air Force. He was a founding member of Lord of Life Lutheran Church.

Charles grew up on a working farm in southern Iowa. He graduated from High School at age 16, and enrolled in the U. S. Navy. As he was processed for discharge at Great Lakes Naval Base in Waukegan, Ill., he met the love of his life, Vivien. They married on August 26, 1946, and after a short time in Iowa, returned to Kenosha and started their family while Charles began his career at S.C. Johnson’s in the Traffic Dept. He stayed with them for 35 years, was active in their activities.

Upon Retirement from SCJ, he went back and worked for the next 20 years in several capacities, with the favorite role as Conference Attendant at Wingspread.

His main dedication of his life was to the Church, always active in various roles, on Boards. This culminated in he and Vivien becoming a founding family for the Lord of Life Church. They were active in many aspects, including service with the INNS program. He also really enjoyed the Men’s Group Saturday Morning Breakfasts, never missing them if possible.

Their private life was active also, filled with family get-togethers, enjoying music, the Kenosha Art Association, and especially traveling on cruises. They were fortunate to take several of them to many different areas. He loved to golf, and was on different leagues, especially enjoying the foursome from Church. In-between those, he loved to watch the grandkids in their sports and music programs and always was supportive of them, in anything they asked of him.

Charles was a man who loved life, people, and helping wherever he could.

Charles was preceded in death by his parents, wife Vivien and brother Gerald.

Funeral services with full military honors will be held on Thursday April 4th 2013 at 6:00PM at Lord of Life Lutheran Church. (5601-Washington Rd.) Visitation with the family will be on Thursday at the church from 4:30PM until the time of services. Burial will take place at Southern WI Veterans Cemetery.