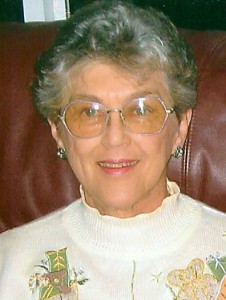 Arvella J. McPhaul, 84 of Kenosha WI passed away peacefully into the hands of the Lord on March 10, 2013.

Born in Philadelphia on November 9, 1928, she was the daughter of the late Harold and Vera Rudgal. As a child her family moved to Kenosha WI when her father was hired as a civil engineer for the City of Kenosha Water Utility.  Arvella graduated from Kenosha High School.   She met the love of her life while attending the University of Wisconsin Extension. During a class Arvella dropped her pencil on the floor and she and Don knocked heads while attempting to pick it up.  They began dating and were married on August 13, 1946.

Arvella was a stay-at-home Mom to three girls.  She was very involved in their activities: she coached volleyball, was a Girl Scout leader and was noted for her creative Halloween costumes.  Golfing, gardening and crafting were here loves.  She had her 15 minutes of fame when in October, 1985 her corn husk angel Christmas tree top won an ornament contest in Good Housekeeping Magazine.  Arvella belonged to garden clubs in Kenosha and Hot Springs Village AR.  She and Don retired to HSV and spent twenty years enjoying the milder weather, making new friends and enjoying the golf courses in the community.

Arvella belonged to St Mark Catholic Church in Kenosha and Sacred Heart of Jesus parish in HSV.  She participated in many Christian women and the Ladies of the Sacred Heart Guild activities.   She spent her final hours surrounded by her family praying and singing her favorite hymns.

In lieu of flowers, donations may be made to Brookside Care Center Activity Fund, or to St. Joseph Catholic Academy.   If you are attending the funeral Mass, please wear your spring colors to honor Arvella’s love of gardens and flowers.

A Mass of Christian Burial will be celebrated on Thursday March 14th 2013 at 1:00PM at St. Mark Catholic Church. Visitation with the family will be held on Thursday at the Church from 11:00AM until the time of mass. Burial will take place at a later date at All Saints Catholic Cemetery.