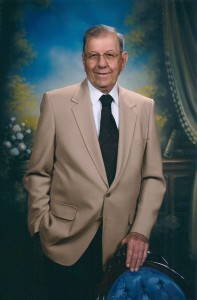 Warren was born on February 26, 1929 in Caledonia, MN to Willie G. and Minnie (Steneroden) Myhre. Warren served his country in the U.S. Army from February 1951 to February 1953 in Goosebay, AK and Fort Eustis, VA. On March 26, 1955 he married Fern E. Lutz at St. John’s Lutheran Church in Caledonia, MN. In 1956 they moved from La Crescent, MN to Kenosha, WI. Warren was employed by the Kenosha County Highway Department for 26 years and retired in 1990. He loved bowling, playing cards, dancing and was a master gardener. He was a Green Bay Packer and Minnesota Vikings fan. Warren was a gentle, kind, loving husband, father and grandfather. He always wore a big smile on his face and was loved by everyone who knew him. He was deeply in love with his wife Fern of 57 years until the day he passed away. He loved and cared for all animals and living things. He will be greatly missed by all.

Warren was preceded in death by his parents and siblings Orpha (Myhre) Anderson, Arlo Myhre and Murial (Myhre) Tyribakken.

Thanks to Hospice Alliance, Society’s Assets, ADRC, KAFASI, Zablocki VAMC, Alzheimer’s Association, Pastor Pagel and Pastor Sievert of Bethany Lutheran Church, where Warren was a member. Also special thanks to Wanda LeMonica and all of the other caregivers who helped our family during the last months of his life.

In lieu of flowers, the family wishes that donations be made in Warren’s name to Hospice House and/or the Alzheimer’s Association.

A memorial service will be held with his family and friends in Caledonia, MN where he will be laid to rest.