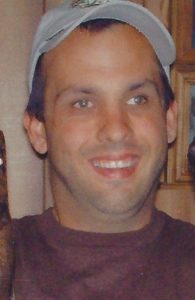 Thomas V. “Tommy” Lenfestey III, age 45, of Kenosha passed away at his home surrounded by his family. Tommy was born on June 21, 1975 in Kenosha to Thomas Jr. and Deborah (Cappelen) Lenfestey. He attended local schools and graduated from Tremper High School in 1994. Tommy worked for over 22 years at Piggly Wiggly and for 4 years at Festival Foods and always greeted everyone he saw with an honest smile. He loved the outdoors, particularly ATV and bike riding. Tommy really loved shopping with his mom and going to Packer games with his sister. Tommy especially took pleasure in fishing with his dad and uncle Kenny, where excessive bragging about their superior methods and catch was a must. He was passionate about gardening, building things, power tools and music, especially 50-60’s era oldies. Tommy was a happy person who enjoyed giving to others when he could, and Christmas was Tommy’s favorite holiday. He will be deeply missed by everyone who knew him.

He was preceded in death by, his maternal and paternal grandparents as well as aunts and uncles.

Tommy is survived by, his parents, Thomas and Deborah Lenfestey; his sister, Amy (Rodney) Cavitt; half-sister, Diane Lenfestey and many aunts, uncles, other family and friends.

Funeral services for Tommy will be held at 11:00 A.M. on Friday, October 30, 2020 at Kemper Center – Founders Hall (6501 – 3rd Avenue). A visitation with the family will be held at Kemper on Friday from 10:00 A.M. until the time of service. In lieu of flowers, memorials to Children’s Hospital of Wisconsin would be greatly appreciated.