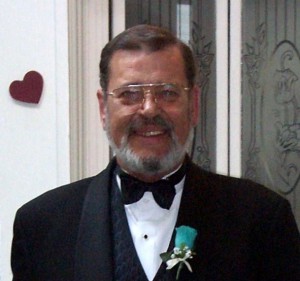 Theodore George “Ted” Sternbach passed away at Froedtert Hospital in Milwaukee on Friday, October 18, 2013 after a short battle of cancer with his loving family by his side.

He was born in Munich, Germany on April 1, 1942 the son of the late Theodor Frh von Sternbach and Lucia Viviani (Sternbach) Selander.

On October 4, 1963 at the Beale Air Force Chapel in Marysville, Calif. He was united in marriage to the love of his life, Betty Jean Keller.

Ted graduated from Bradford High School in 1960, attending the Univ. of Wis. – Whitewater 1960-61, joining the US Air Force in the fall of 1961.  During his 9 years of active service, besides being station in several bases stateside, he spent tours in Vietnam and Korea being Honorably Discharged in 1970.  (In 1966 while stationed in California Ted was proud to become a Naturalized U.S. Citizen, giving up his Austrian citizenship.)

After serving in the Air Force, Ted returned to school and was a 1972 UW-Parkside graduate in Psychology and was awarded a 4 year graduate assistantship from the UW-Milwaukee to support his work toward a PhD degree.  He was one of 10 to receive full support of over 300 graduates who applied.  During his student externship program, he worked with cerebrally damaged youngsters at the Racine Children’s House.  After graduating UW-M he worked for more than 30 years as a Clinic Director in the Chemical Dependency/Family Therapy area retiring from ARO Behavioral Health Care, Inc.  Ted’s dedication to his profession was phenomenal.  Past clients made sure to thank him for their success when meeting him in public.

Ted again took the opportunity to serve his country by joining the Army Reserves after completing college, retiring in 2008 with more than 20 years of combined service.

Ted’s big passion, besides his family, were his “yellow”1968 Pontiac Bonneville Convertible that he loved “scooping the loop” in, and showing his car in several Car Shows in Kenosha, he especially enjoyed being in the Veterans Car Show on Simmons Island benefiting our Wounded Warriors.   He had a great time driving Ronald McDonald in this years Kenosha July 4th Parade. He was also a member of the Midwest Street Machine Assoc.

Singing was another big passion.  In the 1980’s he sang with the S.P.E.B.S.O.S.A. and was a member of the “All Time Favorites” quartet, who sang in many contests and also sang in July 1983 at the Milwaukee Brewers game.   More recently, Ted sang with the Penguin Players at the Eagles Club in Racine performing in April and October annually plus singing on a float in the July 4th Racine parades.  He loved singing and rehearsing with the Penguins, reading and watching SyFi.

Ted was also a member of the VFW Kenosha, DAV, Eagles Nest in Racine, Fraternal Order of Eagles Aeries, Racine and Moose Lodge #286, in Kenosha.

Ted had a soft heart for rescued dogs, fostering and adopting several from Safe Haven Bichon and Friends from Barneveld, WI.  He is greatly missed by his “Furkids”.

In addition to his parents he was preceded in death by his stepfather Perry Selander and brother Ralph Selander.

In honor of Ted’s wishes his remains will be placed in the wall at the Southern Wisconsin Veteran’s Memorial Cemetery in Union Grove.

Ted’s family welcomes friends and family to join them on Saturday, November 30th at the Kenosha Moose Lodge #286, 3003 – 30th Avenue, from 2PM to 5PM (North Entrance) to Celebrate Ted’s Life.  We would appreciate any pictures and stories that you would like to share.

In lieu of flowers, please make donations to one of Ted’s favorite charities:  The “Wounded Warrior Project”, web site – WoundedWarriorProject.org/Donate.

Ted’s family wishes to thank all the doctors, nurses and support staff at United Hospitals in Kenosha, the Cancer Center at Froedtert Hospital in Milwaukee, and Somer’s Rescue who took care of Ted during his brave fight these past few months.