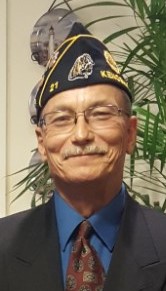 Jon G. Sutter, 60, a resident of Pleasant Prairie, passed away at the Captain James A Lovell Federal Health Care Center on Sunday March 1, 2020, comforted by his American Legion Family and Friends. Jon was born in Seoul Korea on March 16 1959.   He was adopted by John and Elizabeth Sutter and was admitted as a citizen of the United States of America on the 14th day of June, 1966.  Jon attended Zion, Benton Township High School.  He received his High School Diploma from Coachella Valley College in 1978.  From 1977 to 1988 he proudly served his country as a United States Marine.

He was preceded in death by his Parents and a brother.  He is survived by his son Jon Sutter, Jr. and his sister, Kim. A visitation will be held on Saturday March 7th from 10:00 am until noon at The American Legion Post 21, 504-58th Street Kenosha.  At noon there will be a memorial service with full military honors.