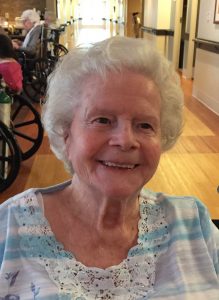 Shirley Mae Barlow Weyrauch, passed away on December 24, 2019.  She was born on November 25, 1926 in Lenoir, North Carolina to James Walter and Cora Belle Rivers Barlow.  After spending her early years in Lenoir, she moved to Kenosha, Wisconsin when she was 16 years old with her parents.

She was working at Greene’s Grocery Store when she met her husband, Paul Richard Weyrauch, Jr. after his return from WWII.  They married on June 21, 1947.

1 great great-grandson.  She was a member of Trinity Evangelical Lutheran Church for many years and served as a Sunday School Teacher and Choir member.  She was also a Girl Scout and Cub Scout Pack Leader.

A sincere thank you to Jim Kreuser and the excellent staff at Brookside Care Center, Heartland Hospice, Pastor Tom Smith and Dr Brian Hettrick for the exceptional care and compassion.

Funeral services for Shirley are 12 Noon Sunday, December 29at Trinity Evangelical Lutheran Church (7104 – 39th Avenue Kenosha, WI 53142). A visitation with the family will be held on Sunday at the church from 11:30 A.M. until the time of service.