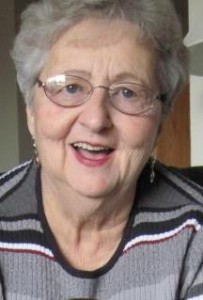 Shirley was born July 14,1934 in Kenosha WI to William and Rose (Willems) Huck. She attended St. George School and graduated from Mary D. Bradford High School. She married Don Leiting who preceded her in death and on December 10, 2005 she married Kenneth J. Burman.

Shirley worked at Kenosha National Bank, Medical Products of Racine and at Snap-On Tools of Milwaukee. She enjoyed traveling; visiting Europe twice and the Caribbean on many occasions, as well as taking many bus trips. Shirley enjoyed reading and spending time with her big family.

Shirley was preceded in death by her parents, her husband Don Leiting, her son Michael Leiting, her brother Bob Huck and her sisters Dorothy Huck, Pearl Richie and Laverne Nelson.

Shirley wanted to express her deep appreciation to her husband and family, to Dr. Bandealy, Casa Del Mare and to Hospice Alliance for the compassionate care given to her.

A Mass of Christian Burial will be celebrated on Friday March 1st 2013 at 12:00 noon at St. Elizabeth Catholic Church in Kenosha. (4816-7th Avenue. Church entrance on 8th Avenue) Visitation with family will be held on Friday at the church from 10:00AM until the time of mass. Burial will take place at a later date at St. George Catholic Cemetery.

In lieu of flowers memorials to Hospice Alliance would be appreciated.