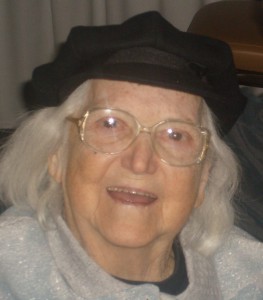 She was born October 14, 1922 in Racine to the late George and Frieda (Berg) Wohlust. On December 1, 1951, she married Frederick Oertel. Ruth was a homemaker and a wonderful and caring mother to her children.

As a child, her fondest moments were spent with her father who was the manager of Muskego Beach Amusement Park. Ruth’s daily visits sparked a lifelong love of carousels and she was fond of recounting the hours she spent there.

Ruth was a tireless volunteer for Historic Preservation and enjoyed ushering at the Racine Theater Guild. She was involved in the Trinity Troopers and many other groups during her lifelong membership at Trinity Lutheran Church. Ruth played baseball with a women’s team during WWII and enjoyed playing the game well into her seventies.

Ruth is survived by her husband Frederick “Fuzzy” Oertel, and two children; Jeff (Diane) Oertel and Noelle “VJ” Oertel. She is also survived by her son-in-law David and her grandson Joshua. She was preceded in death by her daughter Michele Schoolcraft.

Funeral services will be held on Saturday September 14th 2013 at 11:00AM at Trinity Lutheran Church in Racine. (2065-Geneva Street) Visitation with the family will be on Saturday at the church from 9:30AM until the time of services. Burial will take place on Monday September 16th 2013 at 9:00AM at Southern WI Veterans Cemetery.