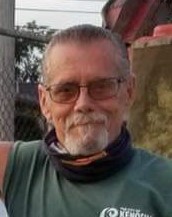 Ronald D. Thornton Jr., age 63, of Kenosha passed away on Monday, January 10th, 2022 at his home. Ron was born on June 9th, 1958 in Sea Isle City, NJ to Ronald D.  and Phyllis (Langrell) Thornton Sr. He grew up in Kenosha and attended local schools. Ron served in the United States Army Reserves for three years until his honorable discharge. He married Ann Gabron and he worked for many years at the Parks Department with the city. Ron loved the Packers, riding his bike and his Harley, and going down by the lake. He enjoyed spending time with his family, especially his great nephews, Luca and Leo. Everyone who knew him knew of his generosity and he would give the shirt off of his back to family and friends in need.

He was preceded in death by, his father.