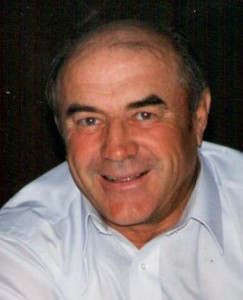 Bob was born in Kenosha on October 25, 1932, to Thomas and Rose (Denig) Fliess. He graduated from St. George Catholic Grade School in Kenosha and St. Catherine’s High School in Racine. On April 21, 1956, he was united in marriage with Elaine Nienhaus at St. John’s Catholic Church in Paris.

Bob worked at Nash/Kelvinator (American Motors), but he made his living as a farmer working side by side with his wife Elaine. They farmed from 1956 until the time of their retirement in 1996, and Bob also worked as a Pioneer Corn salesman.
As a longtime member of St. John the Baptist Catholic Church in Paris, Bob was very involved in fundraisers and especially the annual picnic. He belonged to the Paris Ridge Runners Snowmobile Club and enjoyed riding motorcycles. He was an avid dominoes player and was involved for years in a couple’s bowling league.

He was preceded in death by his parents, his brother Charles Fliess, his sisters Irma Fliess and Helen Tunkieicz, his daughter Audrey Fliess and his son-in-law Paul Arneson.

A Mass of Christian Burial will be celebrated on Monday April 17, 2017, at 12:00 noon at St. John the Baptist Catholic Church in Paris WI. (1501-172nd Avenue). Visitation with the family will be on Monday at the church from 9:00AM until the time of mass. Burial will follow in St. John’s Catholic Cemetery.

In lieu of flowers, memorials to either St. John the Baptist Catholic Church or to Hospice Alliance would be appreciated.