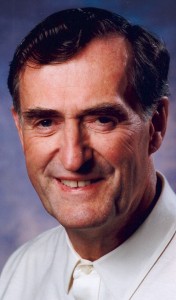 Born on August 18, 1923 in Kenosha, he was the only child of the late Raymond C. and Elsie (Johnsen) Williams Sr.

A lifelong Kenosha resident he was educated in the schools of Kenosha. He served in the US Army Air Corp during WWII.

On November 3, 1951 he married Betty Schelling at Trinity Lutheran Church in Racine. She would precede him death in June of 2011.

He was employed for many years as an automotive parts salesman. He was also employed at the Kenosha News until his retirement. He was a long time member of Bethany Lutheran Church.

He is survived by his daughter; Becky (Jim) Beach of Kenosha and one grandson Rob Beach of New York.

He was preceded in death by his parents and his wife.

Funeral services will be held on Thursday March 29, 2012 at 11:00AM at Bethany Lutheran Church in Kenosha. Visitation with the family will be on Thursday at the church from 9:30AM until the time of services. Burial will take place at Sunset Ridge Memorial Park. In lieu of flowers, memorials would be appreciated.