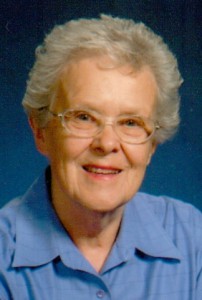 Born on June 15, 1924 in Milwaukee WI, she was the daughter of the late Joseph and Ethel (Shields) Hayes.

She studied at Mount Mary College and received a degree in nutrition.  After a brief career as a nutritionist, she married Dr. Paul Joseph Ambro on June 25, 1949. They moved to Kenosha in 1951 to establish Dr. Paul’s medical practice and to raise their growing family.  Together they were blessed with 50 years of camaraderie and friendship with the “Potluck Group.”

She was a member of St. Mark’s Catholic Church. She was involved in the Kenosha Community Concerts and was a founding member of the Kenosha Montessori School.  Education was vital to her and she had audited many classes at UW- Parkside averaging at least one a semester for over twenty years. She considered herself a life-long learner and worked to instill that philosophy in her family. She loved to read and was an avid bridge player. She remained very active as a senior and was down-hill skiing at the age of 79. Always interested in the fine arts, she travelled to many art museums throughout the world.  She treasured going to the Lyric opera performances with her husband and dear friends for over 50 years.

She was preceded in death by her parents, her husband, one brother Jerry, a son Mark in infancy and a daughter-in-law Cathy.

A Mass of Christian Burial will be celebrated on Monday May 20th 2013 at 1:00 p.m. at St. Mark Catholic Church in Kenosha. (7117-14th Avenue) Visitation with the family will be on Monday at the church from 11:00 a.m. until the time of Mass. Burial will take place at St. Mary’s Cemetery in Pewaukee WI at a later date.

In lieu of flowers memorials to either the Kenosha Achievement Center or to St. Joseph Catholic Academy would be appreciated.