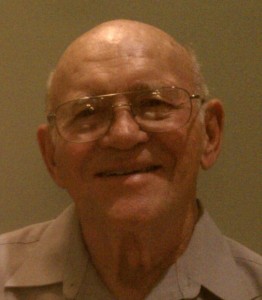 He was born in Kenosha County, the son of the Late Howard and Stella (Drissel) Biehn of Paris.

He was a graduate of Bradford High School. On August 2nd, 1952, he was united in marriage with Trudy Agnes (Fliess) Biehn at St. John the Baptist Catholic Church in Paris, Wisconsin.

Marlin served in the U.S. Air Force in the Korean War. He was employed by Nash/AMC/Chrysler for 42 years. He also farmed in Paris for 30 years.

Marlin was always eager to use his carpentry skills whenever his church or school needed help; had his hammer and saw ready whenever his children, friends or neighbors needed some work done. He built many woodcraft items for St. John’s church or school auctions and loved to make his log cabin bird feeders. He was an active volunteer, and worked at the Soup Kitchen, as an escort driver for the handicapped and for Adopt-A-Family.

In his retirement, Marlin, along with his family, enjoyed building their Log Home in Adams County. He shared this treasure with family and many friends through the years. It was his hunting and fishing home.

He loved to play golf, cards (Sheepshead), shuffle board and was part of a walking club for good health and exercise. He enjoyed traveling to all the states, especially New Mexico and Texas and he had been to many European countries.

Marlin was very dedicated to his Catholic faith, serving the Church in many ways in honor of his Lord.

Marlin was preceded in death by his parents Howard and Stella Biehn, his brother Gerald Biehn and by his daughter Michelle Biehn.

A special thank you to all the care givers at Home Inspired Senior Living in Somers for their love and compassionate care.

In lieu of flowers, memorials to St. John the Baptist Church would be greatly appreciated.