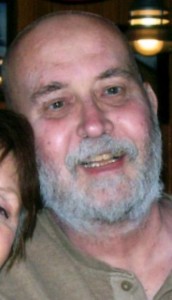 He was born on March 19th 1948 in Superior WI to John L. and Bernice A. (Cronin) Pollock. As a young boy the family moved to Kenosha. He attended area schools and graduated from Mary D. Bradford High School, class of ’66.

He is also survived by his father and 3siblings Jeanne (Kenneth) Skendziel of Fairfield TN, Joseph Pollock of Minneaplis MN and James (Mary) Pollock of Kenosha and also his first wife Paula (Fanke) Pollock.

He was preceded in death by his mother Bernice and both sets of grandparents.

The family would like to thank all the caregivers.

A memorial service will be held at Kemper Center Founder’s Hall (6501-3rd Ave.) on Saturday December 3, 2011 at 3:00 pm. Visitation with the family will take place at Kemper Center from 1:00 pm until the time of the service. In lieu of flowers, memorials to the family would be appreciated.