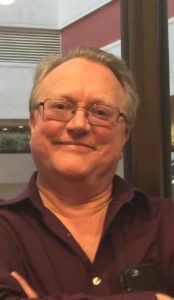 James A. Hoffman Jr., age 62, of Kenosha passed away on Sunday, January 3, 2021 at Aurora Medical Center with his family by his side. Jim was born on January 12, 1958 in Chicago to James and Barbara (Jastrzembowski) Hoffman Sr. and was educated in the schools of Chicago and Schaumburg. Jim served in the United States Air Force from 1977 until his honorable discharge in 1985. He married Jeanne Holmes on July 8, 1989 at Lord of Life Lutheran Church in Waukegan. He worked for over 30 years as an electrical engineer with InkJet, Inc. Jim was a member of St. Mary’s Lutheran Church and the American Legion Post #552. He enjoyed spending time with his family.  Jim traveled with his family on cruises to the Caribbean as well as Alaska. This was one of his favorite types of vacation.  Jim was known as a fix it man who could take anything apart and put it back together again, a “handyman extraordinaire”.

He was preceded in death by, his mother; a brother, David and his sister, Linda.

Due to Covid restrictions, Jim’s family is going to wait on a memorial service at St. Mary’s Lutheran Church. Please check the funeral home’s website in March or April for service times for Jim to be posted.

Thoughts for James A. Hoffman Jr.;