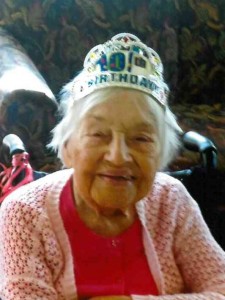 Born on November 7th, 1917 she was the daughter of the late Michael and Mary (Arczsjewski) Bierdz.

A lifelong Kenosha resident she was educated in the schools of Kenosha.

She married Bernard Ashe in 1942. She would then marry Clyde Caudill in 1984.

She enjoyed traveling and decorating both inside and outside. She also enjoyed playing bingo with her friends.

She was a member of St. Peters Senior Club and the Senior Action Council, and St. Mary’s Lutheran Friendly Center.

She was a homemaker but also worked for a time at Simmons Co. and AMC.

She was preceded in death by her parents, her husbands and two brothers; Chester and Alex Bierdz.

A Mass of Christian Burial will be celebrated on Friday December 7th, 2018 at 11:00AM at St. Mark Catholic Church. Visitation with the family will take place on Friday at the church from 10:00AM until the time of mass. Burial will follow at St. Casimir’s Catholic Cemetery